Still small, but already very fine – this is how the copper-gold explorer Geologica Resource Corp. (CSE: GRCM, WKN: A2QQBC / ISIN: CA37254G1090, FFM: 862)present in brief. The company, which was only founded in 2021, is currently positioning itself in the industry with a single project, which is also still at an early stage of exploration. However, this extremely clear portfolio should not hide the fact that there are “old hands” behind the young company. A highly experienced management team with strong mining and mineral discovery credentials is committed to developing the Topley property in British Columbia into a viable and environmentally friendly source of copper. As a bonus, all indications are that the site also offers prospects for gold discoveries. It will certainly be some time before that happens.

For investors, Geologica Resource Corp. already has a number of attractive advantages in store, both in terms of the flagship project “Topley” and corporate structure and finances.

Located in central British Columbia, Topley is a 2,669 hectare copper-gold project comprised of seven mineral claims. The site is accessible via the provincial highway (Hwy 16) and all-weather dirt roads, which is advantageous for its inexpensive exploration. There is access to sustainable hydroelectric power (an important “green” asset for the project). The airport, international deep sea port and cities for local supply are easily accessible, such as the small town of Smithers with 6,000 inhabitants which is 133 kilometers away. The city of Prince George is just over 300 kilometers away.

The project area is located west of Smithers in the Babine Lake region. Granisle and Bell Copper (disused) mines to the northeast and Huckleberry to the southwest are not far away. There are also other producing mines and known deposits in the vicinity of the property.

The “Topley” framework: an option agreement

Geologica Resource currently holds an option to acquire up to 100 percent of “Topley” from optionor Decoors Mining Corp. to acquire. The project was optioned in two tranches: six of the seven claims in November 2020, still as Cabbay Holding, the seventh a few months later, in April 2021 by the newly named Geologica Resource Corp. Option giver is priority here.

The option agreement provides for cash payments of $55,000 and $150,000 of exploration services to be made within four years for the first six claims of 2020; in addition, one million shares will be issued to Decoors.

A one-time payment of CAD 2,500 will be made for the individual claim and shares worth CAD 50,000 will be issued over a period of four years.

Exploration rights exist on all claims; however, additional permits would need to be obtained for advanced work such as diamond drilling. 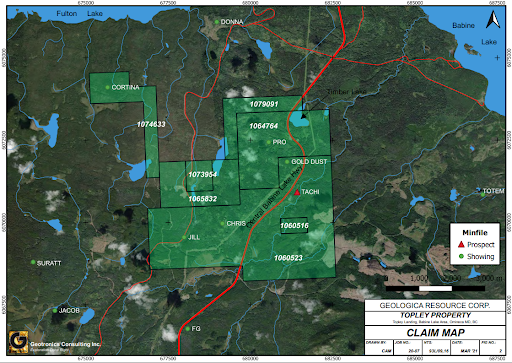 The Geological Environment of Topley

The Babine Lake region is known for porphyry-style and epigenetic mineral occurrences hosted in hydrothermal systems with disseminated (i.e. finely distributed in ore), veins and breccias. They are primarily porphyry-copper, gold-copper and copper-molybdenum deposits. Babine Lake is part of the Terran Stikinia, largest of the Canadian Cordilleras. The terrane formed as an independent, intraoceanic volcanic arc during the Carboniferous and Middle Jurassic periods. The bedrock of Mesozoic volcanic rocks and sedimentary rocks is covered by glacial deposits of varying thickness. The terrane forms the bedrock of numerous volcanoes in the southern part of the so-called Northern Cordilleran Volcanic Province.

The regional geology of Babine Lake is dominated by the Nilkikwa Formation (Early Jurassic Period). It hosts different types of mineralization such as mesothermal gold-silver veins and sulfidic copper-zinc-silver deposits.

Notable deposits in the area include the Bell Copper and Granisle mines. Bell Copper was a significant copper and gold mine with past production and projected reserves totaling 68 million tonnes with recovered and contained 17,755 kilograms (or 570,819 ounces) of gold. Bell Copper produced 21,349 tons of copper and 29,000 ounces of gold in 1990.

As early as the 1990s, experts estimated the additional mineral potential of the Babine Lake area to be very high, in fact the fourth most prospective in the entire Skeena-Wet region (that is the area between the rivers Skeena (the second longest river in British Columbia) and Wet). On that occasion, the total value of known mineral resources (at the rate then) was estimated at $1.96 billion and that of past production at $1.13 billion. 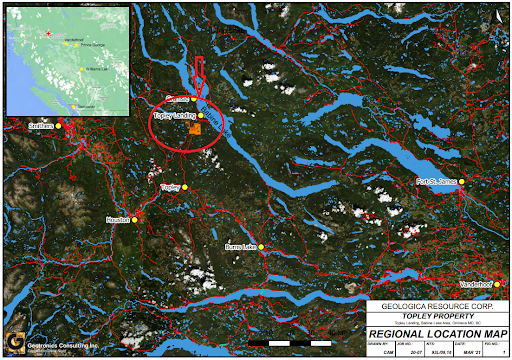 Drilling was conducted on the “Topley” prospect from the late 1960’s to the late 1990’s and a variety of rock samples were collected and analyzed.

Historical drilling returned grades of 2.3 percent copper per tonne, and a 1992 rock sample from the “Topley” area returned 6.84 (E: 6.92) grams per tonne gold. As part of a Decoors Mining Corp. A total of 112 samples were collected and 93 analyzed in 2019 based on the geochemical survey conducted to identify copper-gold mineralization. Indeed, the assay results indicated potential targets for copper and gold exploration on the basis of which follow-up exploration can be justified.

Analysis of historical drilling on adjacent competitor claims to the southwest also provides evidence of an epithermal system. A drill hole by HudBay Minerals Inc. immediately west of Topley intersected epithermal alteration with silver, lead and zinc mineralization – a possible sign of a near-surface, high-grade deposit.

Scattered regional soil samples in this area show similar values ​​for arsenic, lead, zinc and antimony as at Eskay Creek.

A further soil geochemistry survey was completed at Topley in the fall of 2020, collecting 305 soil samples. This identified a potential kilometer-scale volcanogenic massive sulphide (VMS) target in the southwest portion of the sampling grid, as well as six other high priority targets for further exploration. Central to the VMS area are two overlapping high priority target areas. Geochemistry suggests the presence of potentially significant mineralization.

Further evidence is provided by data from a 2018 historic flyover magnetic survey, indicating the VMS target is within a magnetic high associated with the regional Takla volcanic rocks. 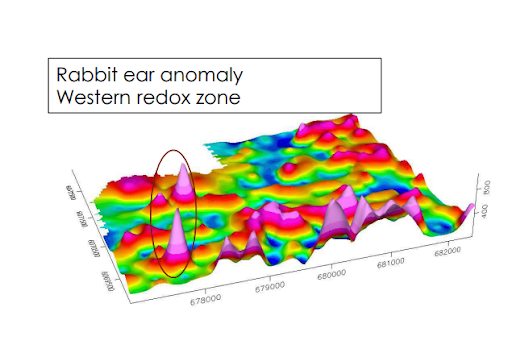 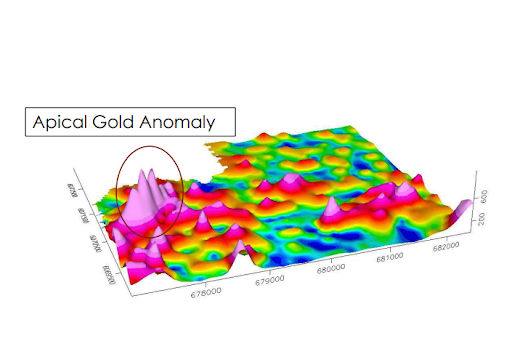 VMS deposits are not uncommon in the region. Notable are the Topley-Richfield prospect (10 km northeast of the project area), the Red prospect (5 km northeast of the Granisle mine) and the Fireweed silver-lead-zinc prospect (12 km west). the disused mine “Bell Copper”). A significant VMS deposit is the world-class Eskay Creek (gold-silver-copper-lead-zinc) deposit, hosted in Hazelton Group rocks that also occur on the Topley property.

The two identified exploration targets to the south are open to the south. A small lake at Topley also contains the highest regional lake sediment samples for molybdenum.

There are numerous similarities between known features at Topley and Centerra Gold’s Mount Milligan Mine, an important open pit copper-gold mine in central British Columbia. This mainly affects magnetic highs and lows and anomalies in copper and gold.

Geologica Resource is doing the exploration

Finally, in the fall of 2022, now under the direction of Geologica Resource, the 2020 soil geochemistry survey was expanded with the collection of 176 additional soil samples. The goal is to also map the remainder of the magnetic high from the aforementioned historical flyover survey, the intrusive rocks identified from a percussion drilling, and a new VSM target.

A look into the near future

Geologica Resource is now faced with the task of using the collected data and available measurement results to determine favorable drilling sites in order to then start their own exploration work with a drilling campaign.

The evaluation of the 176 new soil samples is currently on the agenda. Their results must first be integrated into the geological model in order to be able to draw conclusions about suitable drilling sites. It is already clear that six possible targets are to be prioritized in an area measuring two by two kilometers, which are currently considered to have the highest finding potential.

However, in view of the ongoing work, the company has not yet communicated any specifically formulated milestones, scope of activities or periods for further activities on “Topley”. However, it seems rather unlikely that exploration will start in the winter of 2022/23 (despite year-round access to the site). It is possible that future steps will be specified in spring after the preparatory work has been completed.

In summary, despite its very early stage of exploration by Geologica Resource, Topley offers everything that a potentially successful project requires.

At the helm of the fledgling company, Doug Unwin serves as President and CEO. Unwin has an academic background as a Master of Business Administration and Bachelor of Science. He is a seasoned executive with over 30 years of expertise, 17 of which in the public market. Not only does he hold a patent, he also developed a business model for a biotech company that ended up being sold for $1 billion.

Chartered Accountant Rob Charlton , also as a Director, brings more than three decades of accounting and financial management experience. He was a founder of Charlton & Co., an accounting and tax advisory firm.

John Buckle is a professional geologist and as such has been involved in the discovery of numerous mineral deposits including the Ekati and Snap Lake diamond mines. He found the Eastern Deeps in Voisey's Bay, worked in Brazil for Desert Sun Mining Corp. (acquired by Yamana Gold Inc.) and Doubleview Gold Corp. for the "Hat" copper-gold porphyry project in British Columbia.

The geologist Robert Boyd , who is also President of Endurance Gold, is a consultant to the management team. He has over four decades of experience in exploration, management, corporate finance and governance. His career stints include Athabasca Potash Group (acquired by BHP) and Ashton Mining of Canada Inc. (acquired by Stornaway Diamonds). He is also Vice President of Exploration for Homestake Canada Limited.