Goldshore Resources (“Goldshore” or the “Company”) is an emerging junior gold developer, and acquired the Moss Lake Gold Project from Wesdome Gold Mines Ltd. in January 2021, and who remains a strategic shareholder of Goldshore with a 30% equity position in its common shares (TSXV:GSHR).  The company is well-financed and supported by an industry-leading management group, board of directors and advisory board.  Goldshore’s Moss Lake Project has a historical resource of 4m oz. of gold, has embarked on a 100,000m drilling campaign and holds one of the largest land packages by a mining company in North-western Ontario.  The project displays significant resource expansion potential, as Goldshore takes the project through its next stages of exploration and development, towards an updated mineral resource estimation (MRE); updated preliminary economic assessment (PEA) and visibility towards feasibility study (FS).

The Project is located approximately 130 km west of the city of Thunder Bay, Ontario. It is accessed via Highway 11 which passes within 1 km of the property boundary to the north.  The Project consists of 282 unpatented and patented mining claims that are 100% owned by Goldshore’s subsidiary, Moss Lake Project Ltd., and covers 14,292 hectares.

The Moss Lake Project hosts a number of gold and base metal rich deposits including the Moss Lake Deposit, the East Coldstream Deposit (Table 1), the historically producing North Coldstream Mine (Table 2), and the Hamlin Zone, all of which occur over a mineralized trend exceeding 20 km in length. A historical preliminary economic assessment was completed on the Moss Lake Project in 2013 and published by Moss Lake Gold Mines Ltd1. A historical mineral resource estimate was completed on the East Coldstream Deposit in 2011 by Foundation Resources Inc2,3. In addition to these zones, the Project also hosts a number of poorly understood mineral occurrences which are reported to exist both at surface and in historically drilled holes. The Moss Lake Deposit is a shear-hosted disseminated-style gold deposit which outcrops at surface. It has been drilled over a 2.5 km length and to depths of 300 m with 376 holes completed between 1983 and 2017. The last drilling program conducted in 2016 and 2017 by Wesdome, which consisted of widely spaced holes along the strike extension of the deposit was successful in expanding the mineralized footprint and hydrothermal system 1.6 km to the northeast. Additionally, the deposit remains largely open to depth. In 2017, Wesdome completed an induced polarization survey which traced the potential extensions of pyrite mineralization associated with the Moss Lake Deposit over a total strike length of 8 km and spanning the entire extent of the survey grids. Historic drill hole highlights from the Moss Lake Deposit include 11.3 g/t Au over 70.4m in L-08-01, 2.55 g/t Au over 71.3 m in 89-172, and 1.19 g/t Au over 163.1 m in 87-101.

• Over 34 years of experience in mining and metals including mine financing, mine development, senior level operations and M&A.
• Led Banro Corp. through an operational transition as a private company to divest certain assets
• Former transition CEO of Roxgold (TSX:ROXG) and former senior executive of Katanga Mining (TSX:KAT)
• Former senior executive positions with Kinross Gold (TSX:K) and Co-Steel (TSX:CEI) 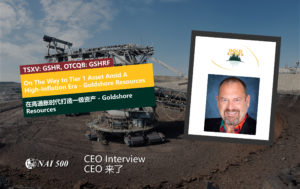