NexOptic Technology Corp. aims to influence the multi-billion dollar optics industry through AI Machine Learning Imaging Software and Optical Products. Nexoptic is chaired by Rich Geruson, former CEO at Lexmark International, Phoenix Technologies, and Voice Signal Technologies, and was in senior management at Nokia, Toshiba, and IBM. NexOptic’s AI Imaging Software, ALIIS, “All Light Intelligent Imaging Solutions,” is advanced algorithms that enable any camera to push past its limits in all lighting environments. Custom to any image sensor, ALIIS enables superior “all light performance” by learning and embedding the optimal light profile on any camera. ALIIS executes on edge processing in a fraction of a second enabling faster shutter speeds and better long-range image stabilization and large reductions in image noise and motion-blur. In the process, file sizes and bandwidth are significantly reduced allowing superior storage and streaming capabilities. ALIIS can also improve downstream applications such as computational imaging, facial recognition, object detection, and visual mapping. NexOptic’s DoubleTake, is designed to influence the sports-optic device market. It won these awards in 2019: Digital Trends “Top Tech of CES” for photography, Edison Gold Medal Award for Advanced Image Capture in the Consumer Goods Category and GearJunkie “Best in Show” – Winter Gear Award. Production is paused as the Company emphasizes its AI. 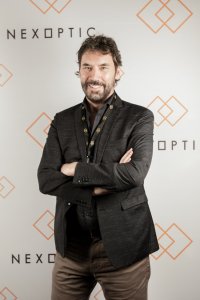