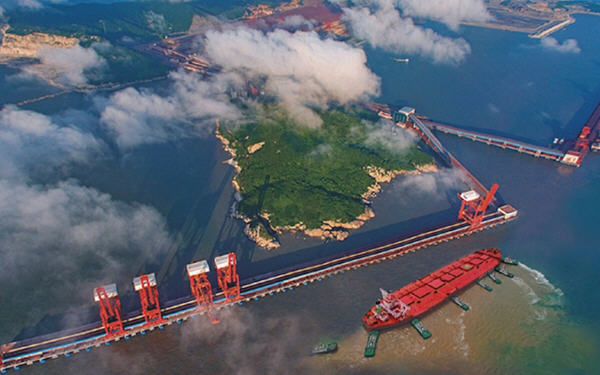 The unit, a partnership with Ningbo Zhoushan Port Group, is generating a completely new product, known as GF88. The high-grade ground iron ore fine uses the company’s flagship Carajás Fines as raw material and will partially feed the growing demand for pellets in China’s steel sector.

GF88, Vale said, provides an environmentally-friendly solution for pellet production. It also supports steelmaking clients with the challenge of reducing their carbon footprint, part of the company’s scope 3 emissions plan.

“GF88 is a truly ‘green’ mineral product. It enjoys high iron content, low impurities and low loss-on-ignition characteristics. It also deploys a unique, innovative and environmental-friendly production process, which has no need for heating or water and generates no tailings,” Marcello Spinelli, Vale’s executive director of ferrous minerals, said in the statement.

Spinelli noted that, despite the challenges brought by the covid-19 pandemic, the technical teams in Brazil and China have been working together to advance the Shulanghu grinding project while maintaining health and safety as top priorities.

While steel mills in other countries have idled blast furnaces due to sluggish demand, steel production in China, the world’s top steelmaker, has been robust, fuelled by healthy profit margins and government stimulus measures.

The country, however, is struggling to minimize the industry’s heavy carbon footprint. The highly polluting process of making steel involves adding coking coal to iron ore to make the alloy, and is responsible for up to 9% of global greenhouse emissions.

Vale’s new product could help reduce pollution, the company said, as the use of pellets in steelmaking cuts emissions of sulphur dioxide and nitrogen oxide.

Vale, the world’s top iron ore miner, is also the biggest producer of pellets and pellet feed. The Rio de Janeiro-based company teamed up with NZP Group in 2016 to produce Brazilian Blended Fines and signed an agreement to launch the GF88 in December last year.

As part of its quest to be carbon-neutral by 2050, Vale is also taking key steps at home.

The company said it had started installing one of the Brazil’s largest battery energy storage systems to supply electrical demand. The Battery Energy Storage Systems (BESS), located at Ilha Guaíba terminal in Rio de Janeiro, is being developed in partnership with Siemens and MicroPower Comerc.

The facility is expected to reduce the port’s electric energy costs by almost 20% as it will substitute the electrical grid supply during peak demand periods when the tariff is more expensive, Vale said. The equipment has a storage capacity of 10 megawatt-hours, which is enough energy to power 45,000 homes for one hour.

Battery Storage is one of the technologies that will be applied to replace diesel energy with renewable electric power in transportation vehicles, such as locomotives and off-highway trucks. The company said the adoption of such technology was part of its Power Shift program. It is the same initiative under which Vale is developing a 100% electric, battery-powered locomotive.

“As we continue to decarbonize our operations, the use of batteries will become an increasingly important part of the electrification of our fleet,” Vale’s Energy director, Ricardo Mendes said in a separate statement.

The mining giant recently committed to invest at least $2 billion to reduce direct and indirect absolute emissions by 33% until 2030. This is in in addition to the company’s intention to align with the Paris accord’s decarbonization goals by 2050.