At one point after hours, Novavax (NASDAQ:NVAX) was down ~30% after STAT News reported that eight participants in a Phase 1 clinical trial evaluating COVID-19 vaccine candidate NVX-CoV2373 had to be hospitalized, a point later found to be erroneous. NVAX apparently contacted STAT to say that no subjects required hospitalization.

The stock is now down only 3% on turnover of 4.7M shares according to Nasdaq.

The SEC is investigating the disclosure of the government’s $765M loan to Kodak (KODK, -3.6%) that caused shares to soar, The Wall Street Journal reports.

The investigation is in preliminary stages and will look at how the company handled disclosure of the loan to make COVID drugs as reports began to emerge a day before the official announcement, the Journal said, citing sources.

Shares soared to as much at $60 with multiple volatility halts on the day the deal was officially announced. They are around $15 now after dilution in shares.

Kodak had shared information about the deal with media outlets a day before the announcement, according to the Journal.

The government loan “doesn’t support a high valuation, carries risk of revision or reversal and the stock should trade back down under $10 even under the best case scenario,” ASB Capital wrote on Seeking Alpha Friday.

The contract may be extended for two additional two-year periods with an option for an additional year after that.

Normalized prescriptions for VASCEPA increased by ~44% in Q2 compared to 47% in Q2 2019, based on data from Symphony Health and IQVIA, respectively.

The formulation is based on Halozyme Therapeutics’ (NASDAQ:HALO) ENHANZE technology. 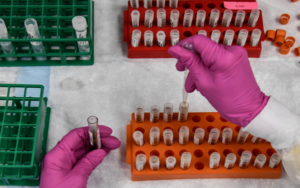