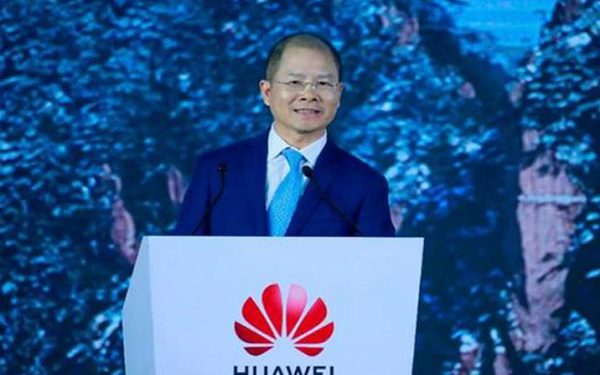 China’s Huawei Technologies is doubling down on software investment as cars are getting smarter and cloud computing is becoming increasingly important to all business, according to the handset maker’s rotating chairman.

“We are seeking opportunities in software to hike investment and revenue from software and services,” Xu Zhijun said to Yicai Global during an analyst summit yesterday.

Huawei is cooperating with three automakers, including BAIC Group and its Arcfox brand, as well as Chongqing-based Changan Automobile and Guangzhou Automobile Group, which will roll out smart vehicles marked with the slogan ‘Huawei Inside’ in the fourth quarter, said the chief.

‘Huawei Inside’ will adorn cars that are equipped with the firm’s autonomous driving technology so that people will know about it, said Xu.

Huawei has invested USD1 billion in developing intelligent vehicle parts, Xu revealed. “Our smart vehicle teams tell me their technologies are the best, achieving 1,000 kilometers of autonomous driving without intervention, much better than Tesla.”

Huawei will improve its software to reduce its dependence on chips and tackle the challenges posed by the US sanctions, said Xu. Due to its addition to the Entity List in May 2019, the Chinese firm is limited in its purchases of US-made technologies. In late 2018, the board of directors decided to spend USD2 billion to enhance the firm’s software engineering capability to a higher level over the next five years, said Xu.

The telecoms behemoth is sticking to its 2018 decision to refrain from car manufacturing. “Huawei talked with many carmakers and learned that the auto industry does not need Huawei-branded vehicles but the firm’s information and communication technology,” said Xu.

But Huawei won’t cooperate with too many carmakers and hasn’t yet decided on the brand names, according to the chairman. “We choose in-depth partnerships with automakers to empower them via ‘Huawei Inside’ and enable co-manufactured vehicles to be future-oriented.”

Huawei announced some new appointments at its cloud business unit on April 9. Besides Xu’s new role as the unit’s chairman, Yu Chengdong, chief executive of Huawei’s consumer business group, will serve as the subsidiary’s chief executive.